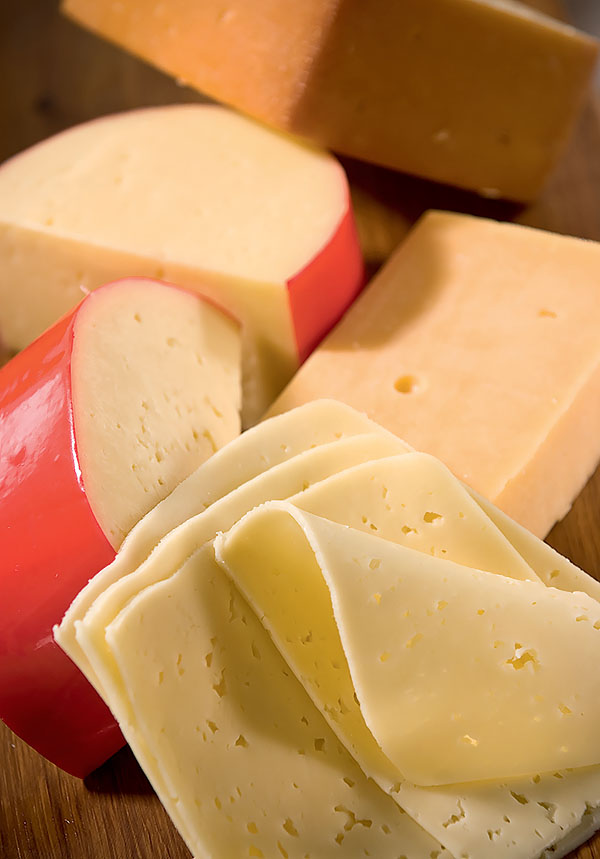 Cheese has been valued since ancient times for its nutritional value, long storage life and great taste. Cheeses also have the necessary nutrients in suitable proportions that are needed for the metabolism of the human body.

The most valuable part of cheese is its proteins. Essentially, cheese is the concentrate of dry matter in milk (especially proteins and fats) that is enhanced and processed by the micro-organisms of the starter.

It is also important that casein, the reserve protein of milk, forms the so-called main skeleton of cheese that binds milk fats during cheese-making. On average, there are 22–31 grams of proteins in a 100-gram portion of cheese.

Cheeses with higher fat content have less proteins, cheeses with lower fat content contain somewhat more. Milk proteins cleave during the ripening of cheese to a greater or smaller extent, so they are readily digested in our gastrointestinal tract and transformed into the amino acids that are important for people.

The longer cheese matures the more cleaved its proteins are. Cheese proteins have sufficient quantities of all the amino acids that the human body needs in suitable proportions.

Cheese is a food product of animal origin, so people who avoid meat in their diet for some reason or another should add cheese to the vegetable component of their diet. As cheese proteins are considerably processed compared with milk, they do not cause the allergies that are characteristic of milk proteins.

During the long ripening process, a high biogenic amine content is formed in some types of mould-ripened cheeses that may, in certain quantities, cause short headaches after eating for some people who are hypersensitive to them.

Some people have problems with lactose digestion when drinking milk; when eating cheese, no such problems occur. The small amount of milk sugar that cheese contains at the beginning of the manufacturing process does not survive it, as the micro-organisms that process cheese ferment lactose into other compounds.

During lactose fermentation, small amounts of lactic, acidic and butyric acids that are in many ways useful for our gastrointestinal tract, and even some alcohol, may form in cheeses. There is no lactose in long matured cheeses and those few people who have problems with digesting lactose may eat them happily. The most reliable proof about zero lactose content is the following note on the label of cheese packaging: carbohydrate content 0 grams.

Fats comprise the third group of main nutrients in cheeses. The components (fatty acids) of cheese fats are one of the bases of the formation of cheese smells and flavours. The fat content of different types of cheeses may vary a lot. This is an important characteristic, and it is usually indicated as fat in the dry matter content of cheese.

The general fat content of cheese is usually indicated in the nutritional value per 100g of the product. The fat content of cheese comprises the main part of the calorie value of this product. 100 grams of high-fat cheeses contain 75–110 milligrams of cholesterol, only 25–35 milligrams of which are absorbed in the bloodstream (the recommended daily allowance of food cholesterol is 250–350 milligrams). If consumed moderately, even high-fat cheeses don’t cause any significant cholesterol problems.

People who have very high cholesterol levels should choose cheeses with a lower fat content (the light varieties) that contain less cholesterol.

It’s good to know that cheese fats contain mostly saturated fatty acids, although about one third of the fat content is comprised of mono- and polyunsaturated fatty acids. In addition, cheese has the best ratio of omega-6 and omega-3 fatty acids for the human body. Products labelled as cheese do not contain trans-fatty acids.

Due to the fat content, it is not advised that people who have weight problems consume large quantities of high-fat cheeses all the time.

Cheeses contain plenty of the calcium and phosphorus compounds that are readily assimilated by the human body, so cheese is an ideal food for those who are afraid of osteoporosis. These two elements are preserved in cheeses primarily due to the fact that they are bound to milk proteins. It’s also good to know that both the calcium-phosphorus ratio and the content of milk fats in cheese support their absorption.

For example, a 20-gram slice of cheese contains, depending on the type, around 100‑200mg of calcium. Although some of the calcium remains in the composition of whey during the cheese-making process, enough of this valuable mineral also stays in the cheese. Furthermore, calcium chloride is added as a firming agent to cheeses.

Cheese is a rich source of magnesium and a repository of the microelements zinc and selenium. Due to the specific composition of mineral compounds in cheese, a piece of hard cheese at the end of a meal helps to prevent teeth damage or the risk of dental caries to some extent.

Cheese always contains table salt that is added for better separation of cheese proteins, flavour and preservation purposes. As various cheeses have different table salt content (0.8–3%), you should check the labelling for salt content as well. People who have to limit the use of table salt for health reasons should choose less salty varieties of cheeses.

Cheese contains several micronutrients – relatively many fat-soluble vitamins (A and D) and several water-soluble B-group vitamins. The bacteria that are active in cheese processing produce the representatives of the latter group.

In order to preserve the microenvironment of cheese and to ensure protection from external influences, producers pack cheeses into plastic foil, wax or paraffin wax. When storing cheese at home you should take into account that the quality of cheese gradually deteriorates when it dries or gets into direct contact with free oxygen.

SCheese shouldn’t be stored with food products with strong odours either. You should store cheese at a moderately cold temperature of 5–10 °C. The correct smell and flavour of cheese is revealed only when cheese is taken out of the refrigerator and allowed to warm to room temperature.

In order to preserve sliced cheese better, producers pack them in a gas atmosphere. When the retail package is once opened, the protective effect of the gas disappears and the cheese slices should be consumed quite soon.

Although there are several mould-ripened cheeses on sale, you should bear in mind that any accidental mould on cheese doesn’t automatically turn it into a mouldripened cheese, and you shouldn’t eat it. The trump card of cheese as a food product is the fact that it doesn’t cause food poisoning if it spoils during the warm season.

Cheese is a treat for cheese lovers, both as a separate dish and as a component in many meals and pastry. You should definitely taste many varieties of cheeses, but for continuous consumption we advise you to choose a few types that suit you best based on accurate information.