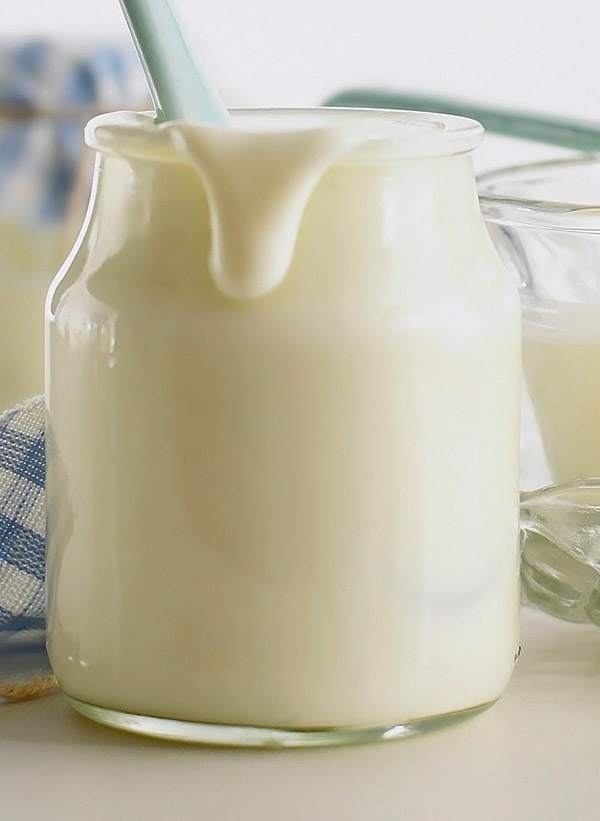 A Healing Fermented Milk Product Known for a Long Time

Fermented dairy products have been well-known in the Mediterraneancountries since ancient times. Step by step, people learned how to make fermentedmilk with various flavours and textures that contained micro-organisms,mainly lactic acid bacteria, as inseparable components.

In the interest of historical truth we have to add that the secret of yogurt-making was probably discovered by the Turks. The word ‘yogurt’, that is so widely used today, is also derived from the Turkish language.

Over the centuries, people have used yogurt for various purposes. In India, yogurt was thought to be a drink of the gods; in folk medicine, it has been used as a treatment for insomnia and against aging. In the Mediterranean countries, regular consumption of yogurt is thought to foster longevity.

Yogurts made of sheep’s or goat’s milk are preferred in Turkey. In the Arabic countries, yogurt is produced from a mixture of camel’s and ewe’s milk. In Egypt and India, on the other hand, they use buffalo’s milk as the raw material for making yogurt.

And this is not the end of the list – you can buy yogurts made of deer’s, yak’s and mare’s milk in different parts of the world.
In yogurt-making, they use a bacterial starter containing at least two types of lactic acid bacteria: lactobacilli and streptococci.

The lactic acid bacteria in the yogurt starter have several functions. They cleave milk sugar and produce organic acids (mostly lactic acid) from it, curdle milk proteins, produce the flavouring compounds characteristic of yogurt, ensure the necessary consistency of the product and synthesize several vitamins.

The bacteria of the starter can cleave milk proteins and fats as well, so that the human body is able to assimilate those milk nutrients even better.

Carbohydrates, Proteins and Fats in Yogurt

The main carbohydrate in natural yogurt is milk sugar. The lactic acid bacteria of the starter use milk sugar as a source of the energy and carbon needed for their growth. As a result of their vital functions the lactose content in yogurt decreases. The lower milk sugar content of yogurt (compared with milk) is the reason it suits those few people whose gastrointestinal tracts do not tolerate milk sugar well.

It does not mean that all yogurts have low carbohydrate content: this is true only in case of natural yogurt. The carbohydrate content of flavoured yogurts is definitely higher (10–16%) due to their ingredients rich in carbohydrates (jam, syrup, fruit bits, honey, chocolate, ice cream, bread crumbs, oatmeal, etc.).

Yogurts flavoured with artificial sweeteners taste sweet but contain the minimum amount of carbohydrates. These products are meant for those few people who have serious metabolic disorders.

The protein content of yogurts on sale in Estonia is around 3–4%. Milk protein is vital to the organism, as it is a nutritious food protein. It contains all the amino acids the human body needs in the appropriate quantities and composition.

During the yogurt manufacturing process milk or skimmed milk powder is added to the raw material. As their content primarily consists of proteins, this increases the protein content of yogurt even more, this being beneficial for consumers.

We shouldn’t forget the fact that due to the activity of lactic acid bacteria the milk proteins in yogurt are more or less curdled, and so easier to digest. Compared with fresh milk, yogurt is digested much more quickly.

It is also important that the fermenting process decreases the allergenicity of milk proteins. So people who cannot drink milk due to an allergy to milk proteins should try yogurt, or goat’s milk yogurt in case of severe allergic symptoms.

The fat content of yogurt directly depends on the fat content of the raw material, as lactic acid bacteria usually do not alter the quantity of milk fats much. Yogurts are divided into three groups based on their fat content.

First of all are the so-called low-fat products, the fat content of which is between 0.1–0.5%. Various thickening agents (modified starch, pectin, gelatine, guar gum, locust bean gum) are often added to low-fat yogurts. The added fibre-rich component (bran, oat flakes) fosters the digestion process of a yogurt eater.

The second group comprises milk yogurts with a fat content of 1.5–3%. This is the unrivalled best-selling product group. Dessert yogurts or yogurt desserts have more fat – around 5–10%. And the fat content of some cream yogurts is even higher. The more fat the product contains the thicker and creamier is its texture.

The food fats in yogurt are important in terms of energy. The fatty acid composition of their lipids is diverse enough that it is biologically valuable. In addition, fatty acids give the product its special taste and a softness and smoothness that you can feel in your mouth.

Vitamins and Minerals in Yogurt

Milk vitamins are well preserved in yogurt. Low-fat yogurts are an exception, as their water-soluble vitamin content is much lower. Of course, the micro- organisms in the composition of the starter contribute to enriching the product with vitamins.

The most important fat-soluble vitamin in yogurt is vitamin A, in low-fat yogurts also vitamin D and, of course, the B-group vitamins B₂, B₅, B₁₀ and B₁₂.

To sum up, if consumed on a regular basis, yogurt, especially probiotic yogurt, satisfies many of our vitamin requirements. The manufacturing process of yogurt does not affect the mineral content of yogurt either. As a liquid dairy product, yogurt is important to us due to its calcium, potassium, magnesium and phosphorus content.

Probiotic yogurts have occupied a special place in the world of yogurts. This is a group of functional products that is most numerous in our food stores. Special lactic acid bacteria (lactobacilli, biphido bacteria), that were originally isolated from the gastrointestinal tract of breast-fed infants, are added to probiotic yogurts.

The probiotic lactic acid bacteria that are selected for production must have a favourable effect on the health of the consumer, they must have the ability to survive the passage through the acidic environment of the stomach, and to reproduce in the intestinal tract; they must give the food product a good taste and smell, and they have to maintain their viability and quantity during the whole shelf-life of the product.

The positive effect of the probiotic bacteria on the consumers is manifested in several ways. This additional help is especially important in case of chronic indigestion problems or after the devastating influence of antibiotic treatment on the bacterial environment. As diversity is the basis of biological success, the informed consumer should eat the probiotic yogurts of different producers in turn.

Although yogurt is a dairy product that keeps well, you should take a look at the use-by date before buying the product. If the temperature requirements in the storage chain have been violated, the fermentation process in the packed yogurt accelerates and the flavour and quality of the product decreases.

Yogurt in Other Food Products and Skin Conditioners

Yogurt is added to the composition of other food products as well. Yogurt ice cream, yogurt margarine, yogurt mayonnaise, yogurt curd and yogurt dip are the best known of them. There are special desserts made of whipped yogurt.

JWhen producing yogurt ice cream, yogurt is made first with the help of the starter. It has to mature for some hours, then the mixture is whisked and frozen. Yogurt ice cream is not pasteurized and although frozen, the product contains living lactic acid bacteria. As yogurt ice creams have a rather low calorie content they are suitable also for those who are watching their figures or want to lose weight.

Yogurt margarine tastes mild; it is a rather energy-rich but low-protein food product that contains all the components typical of margarines, plus yogurt. It’s good to know that there are no living bacteria in yogurt margarine.

The yogurt component in yogurt mayonnaise helps to lower the overall calorie content of that product. Added yogurt makes the taste of the mayonnaise milder as well.

Yogurt dip is a flavoured low-fat yogurt that is used as a ready-made dressing.

In the cosmetics industry, for example, this food product is used either on its own, or together with other substances for making moisturizing, smoothing, soothing, anti-aging and skin nutrition masks. The rejuvenating effect of natural yogurt on the skin is based on the lactic acid contained in the product belonging among the so-called alpha hydroxy acids (AHA).

AHAs remove dead skin cells from the surface of the skin (a peeling effect), thus regenerating a smoother and less wrinkled skin. You have to keep in mind though that human skin has different sensitivity to AHAs and the acidity of the yogurt used for masks may differ. In addition to yogurt used in home skin care, deodorants and shower gels with a yogurt component are manufactured commercially.