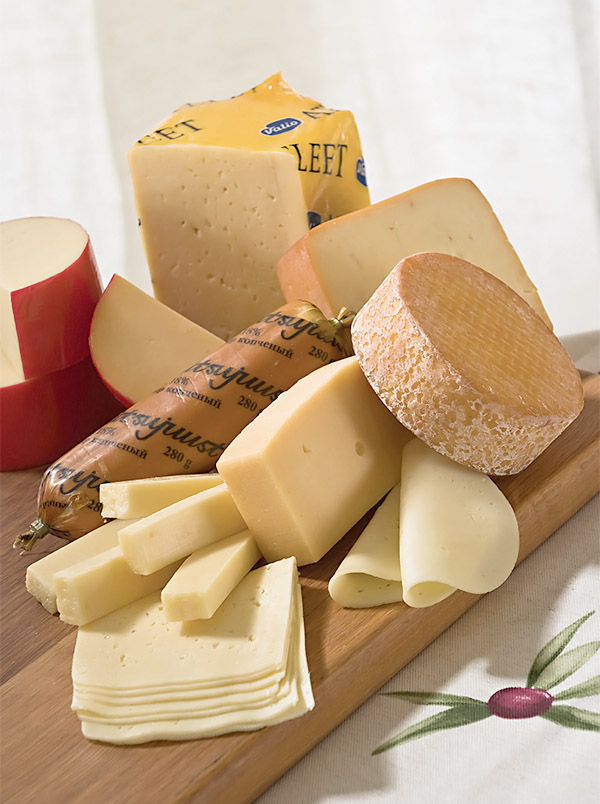 Cheese is a concentrate of milk proteins with various fat contents. Cheese milk proteins are coagulated by adding rennet enzymes and/or a starter to produce cheese curds.

Removing whey from the curds produces cheese. Cheese can be manufactured from cow’s, buffalo’s, ewe’s or goat’s milk. There are over 2,000 known types of cheese in the world.

Watch a video about development of cheese industry

Watch a video about production of cheeses

Read about the benefits of cheese

The main classifications of cheese:

In addition there are other common classifications of cheeses, such as differentiation by:

It takes about 10 kg of milk to produce 1 kg of cheese.

Cottage cheese is a grainy concentrated dairy product produced by fermenting pasteurized skimmed milk with a mesophilic starter. When the acidity is sufficient, a rennet enzyme is added to the mixture. Whey is separated from them during the processing of the curds.

Watch a video about production of cottage cheese

Read about the benefits of cottage cheese

To produce fresh cheese, cream is fermented with a mesophilic starter. Then the mixture is concentrated. Fresh cheese is a plastic dairy product with a slightly sour taste, high viscosity and a smooth texture. Today, fresh cheese is also produced from curd to which various milk-based ingredients are added. The fat content of a traditional fresh cheese is 45%, but there are also varieties with a lower fat content.

Feta is a white rindless brine cheese. Traditional feta has a crumbly texture. Today, most of the feta cheeses are manufactured by using the ultrafiltration method. The cheese is manufactured from standardised pasteurized milk to which a starter and a rennet enzyme are added. Then the curds are processed. After the curds are pressed, the cheese is cut into smaller pieces and salt is added. Feta cheese has a characteristic sharp taste and a high salt content.

Ricotta is an Italian unripened whey cheese that resembles curd. Ricotta is manufactured from goat’s, ewe’s, buffalo’s or cow’s milk. The cheese has a soft and tender texture and a low fat content.

Mascarpone is an Italian cheese produced mainly from cow’s milk. It has a smooth texture and a high fat content. Lactic acid bacteria starter is not used in making mascarpone; instead, citric acid or lemon juice is added to the cream.

Mozzarella is an Italian semi-soft pizza cheese that is special due to the heat-treatment of the cheese curds. Mozzarella is made of buffalo’s or cow’s milk. The cheese is white and slightly elastic, with a soft taste. To increase its shelf-life, mozzarella is marketed packaged in brine.

Sõir is an Estonian cooked cheese made of curd. Curd is mixed with milk and the mixture is heated. Curds and whey are then separated, beaten eggs are mixed in, the mixture is seasoned with salt and caraway seeds and poured into moulds to set. The final product has a slightly sour taste and a grainy texture.

Rennet and lactic acid bacteria are used in manufacturing all ripened cheeses. This group includes many different varieties of cheese that are essentially similar, but some of them are nevertheless very different.

Parmesan is a hard rennet cheese that must be ripened in a place with a high humidity level for up to two years. Parmesan has a slightly sweet aftertaste, its texture is crumbly and there are no holes on the cut surface. This group includes for example Estonian Forte cheese, etc.

Emmental is ripened for at least three months. The cheese has a yellow ochre colour and a slightly sweet aftertaste. It has a strong texture, and its cut surface has large round holes about the size of a walnut. This group includes Saaremaa Ekstra and other Estonian cheeses.

Edam is a Dutch semi-hard rennet cheese that is traditionally sold in spherical form. The cheese is ripened for 1‑10 months. Edam has a yellowish colour and a pure soft taste. The cheese has an elastic texture, is easy to cut, and its cut surface has round or oval holes. The cheese has an even thin rind that is covered with yellow or red foil, wax or paraffin wax.

Estonian Cheese is characterised by being made as cheese bars of long cylindrical shape. The diameter of the cheese bars is 8–12 cm and their length is 10–35 cm.

Gouda is a Dutch semi-hard rennet cheese. It has a soft and slightly sweet taste and an elastic texture that is easy to cut. The cheese is pale yellow and its cut surface has round or oval holes. The cheese is ripened for 1‑36 months. Gouda is typically of a shallow cylindrical shape. This group includes the following cheeses produced in Estonia: Võru Gouda Cheese, Saare Cheese, Marta Cheese, etc.

The cheeses of Tilsiter type are semi-hard rennet cheeses. It has an even pale yellow colour, a slightly sour and characteristic smell and taste, and a butterlike consistency. The cut surface of the cheese has a lacy texture with irregular small holes in it. This group includes the following Estonian cheeses: Atleet, Russian Cheese, Saare Leet, Estman Cheese, etc.

Havarti is a Danish semi-soft rennet cheese that is ripened for up to 3 months. It has a mild, slightly creamy and sour taste. It has an even texture, and the cut surface has small irregularly distributed holes. The cheese is of pale yellow to yellow colour. This group includes the following Estonian cheeses: Võru Havarti Cheese , etc. 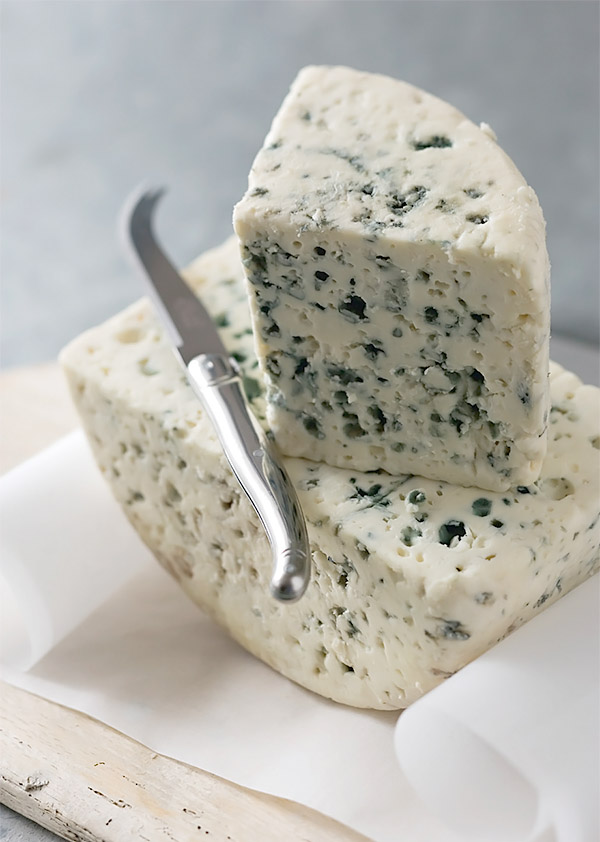 Roquefort is a French soft blue-veined cheese made from heat-treated ewe’s milk. The cheese is ripened for 3 months. Roquefort has a strong, even a sharp taste.

Its texture is creamy, and it has distinctive veins of green mould. Cheese bearing the name of Roquefort can be produced only in a certain region in France.

Gorgonzola is an Italian soft blue-veined cheese made from cow’s or goat’s milk. The cheese is ripened for 3‑4 months. The cheese has a strong aroma and taste, and a flowing content. The cut surface of the cheese is marbled with greenish-blue mould. Cheese bearing the name of Gorgonzola can be produced only in a certain region in Italy.

Brie is a French soft-ripened cheese made from cow’s milk. The cheese is ripened for at least 1‑5 weeks. Brie is pale yellow on the inside and is covered with an edible white mould rind.

The cheese has a strong pleasant aroma and a slightly piquant taste. Cheese bearing the name of Brie can be produced only in a certain region in France. Breti Brie manufactured in Estonia belongs to this group.

Camembert is a French soft-ripened cheese made from cow’s milk. Camembert is pale yellow on the inside and covered with an edible white mould rind. The cheese is ripened for at least 3 weeks. If the ripening time is longer its content becomes softer. The more ripened the cheese, the more intensive its taste. Cheese bearing the name of Camembert can be produced only in a certain region in France.

Production of Cheeses in Estonia

Watch a video about production of cheeses in Estonia. Jaana Meejärv, Valio Eesti AS.

Production of Cottage Cheese in Estonia