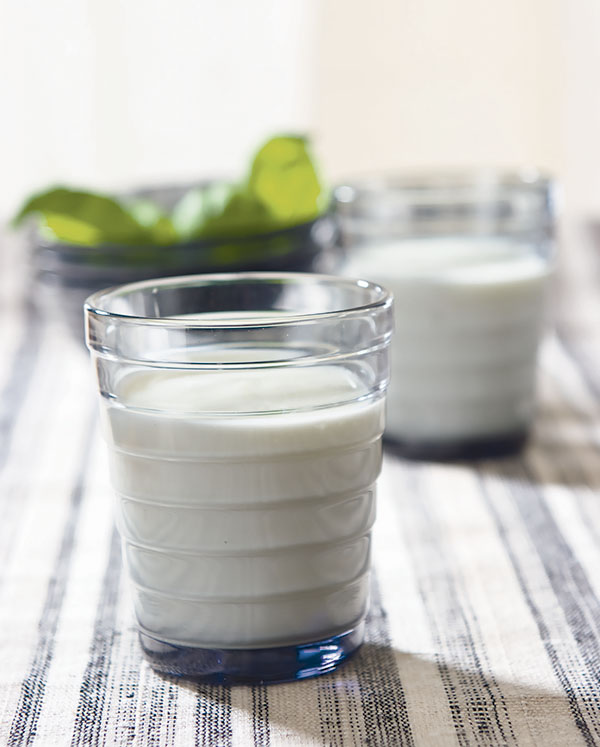 Kefir is of Heavenly Origin

According to an ancient legend it is believed that the lactic starter of kefir is of heavenly origin ‑ the kefir fungi allegedly came from the prophet Muhammad himself who created this drink to reduce the consumption of alcohol.

Kefir was known to the Estonians as early as the end of the 19th century, and the first article about this drink was published in 1889. Kefir became popular at the beginning of the 20th century when it was called power milk, and newspapers wrote about its composition, how to prepare it at home, and how to use it for healing purposes.

Originally, kefir wasn’t a cheap drink at all, its price was as much as three times higher than the price of milk.

Today, kefir is manufactured with the help of a mixed starter that contains various yeasts and aroma-generating and acetic acid bacteria as well as lactic acid bacteria (lactobacilli, lactococci).

The microbiological composition of the starters varies from region to region. This may explain the reason why kefir from different regions, notwithstanding the same nutrient composition, has a different smell and taste.

Due to the mixed starter the fermentation process is also mixed; indeed, in addition to lactic acid, kefir contains carbon dioxide, various volatile acids, several flavouring compounds, and even a very small quantity of alcohol. Yeasts perform alcoholic fermentation, as a result of which milk sugar is converted into ethanol.

The gas bubbles (carbon dioxide) that separate as a by-product of the alcoholic fermentation foster the formation of small-flaked curds in the product. There is around 0.5–1% of alcohol in kefir. The alcohol content depends both on the fermentation time and temperature, but there is no need to be afraid that this might cause intoxication.

Kefir contains all the groups of the main and micronutrients in suitable proportions. As the varieties of kefir on sale today mainly differ in their fat content, let’s start with that. Producers manufacture almost fatless (0.05%) kefir as well as products with a higher fat content (1%, 2.5% and 3.2%).

Everyone who has tasted kefir knows its refreshing and slightly sharp flavour. At the same time – the higher the fat content of kefir, the less you feel it. Of course, the drink with a higher fat content gives more food energy, but there are no reasons for concern.

The difference between low- and high-fat kefir is just over 3% or, in terms of calories, only 30 per 100 grams of the drink. Taking into account how important milk lipids with diverse composition are in the metabolism, this shouldn’t be a reason for you to consider giving up high-fat kefir.

Kefir with higher fat content is especially important in the diet of children, as their taste is more sensitive and their energy requirements are higher. Absorption of some necessary mineral compounds in our gastrointestinal tract is lower with low-fat kefir, and it also contains less fat-soluble vitamins.

We should also stress the fact that the myocardium prefers to use fatty acids in normal circumstances. Kefir is not a problem in terms of cholesterol, because it contains this compound in very small quantities.

Now a few words about proteins. Depending on the fat content of the products, they contain 2 to 4% of protein. During fermentation, allergenicity of several milk proteins is reduced, so kefir causes fewer allergies compared with fresh milk. Hence the advice to give kefir to babies who are allergic to milk proteins.

The fact that proteins in fermented milk products, including kefir, are easier to digest is not trivial either, as milk proteins in kefir are already curdled and also partially split by the enzymes of micro-organisms. Depending on the fat content and duration of fermentation of the product, kefir contains around 3.5–4% of carbohydrates, mostly lactose.

Like other fermented milk products, kefir contains less lactose compared with ordinary milk. The difference is caused by the fact that micro-organisms of the mixed starter use lactose for three purposes: for their own growth, and for producing lactic acid and alcohol.

The calorific value of kefir is rather low. On an average, you get 60‑120 calories from a glass or a 200-gram portion of kefir. The first value is for the fat-free drink, the other for the drink with the highest fat content. The best-selling kefir in Estonia – with 2.5% fat content – gives around 100 calories per glass.

Kefir is an acidic drink with a pH value of between 4.2–4.6, so it has a stimulating effect on the digestive glands. A glass of kefir before the main course stimulates the digestive process afterwards, and improves the appetite as well. In addition, kefir increases the acidity of the stomach to some extent, thus improving the digestion of the people who suffer from hypoacidity.

Kefir also helps to assimilate micronutrients, vitamins and microelements. It’s good to know that microbes enrich the product with B-group vitamins; their contribution is especially high in synthesizing vitamin B₁₂. At the same time, kefir contains almost all the vitamins that were in the original milk.

We should emphasise calcium among the mineral substances in kefir. Some producers increase its content even more by adding calcium salts to kefir. Besides calcium, kefir also contains a considerable amount of magnesium and phosphorus compounds, and its potassium and sodium ratio is good for people.

The nutritional value of kefir in the eyes of a health conscious consumer should be increased by the fact that the product does not contain additives.